Windybank Olives is a small boutique family owned & operated grove, which began in October 2001, with the planting of 500 Frantoio and Corregiola trees. In 2003 the grove was extended with the addition of Manzanillo, Leccino and Californian Queen (UC13A6) trees to give a total of 750 trees. Our first harvest commenced in early Autumn 2009.

The grove is located at Baerami in the Upper Hunter Valley, on a hillside surrounded by the pristine Wollemi National Park and the ruggedly beautiful Goulburn River National Park. The property has almost 1 kilometre of frontage to the Goulburn River, whose catchment falls largely within those two National Parks.

The surrounding farmland, on the eastern side of Mt Dangar, was settled in the mid 1800’s. Over the past 150 odd years the land has largely been used for traditional agricultural pursuits such as grazing country for sheep, beef & dairy cattle. In more recent years, vineyards and horse studs have made their appearance in the area – and the region is now renowned for producing fine wines and thoroughbreds! The fertile river flats have been used continuously for cropping and the production of high quality lucerne hay. The introduction of the olive in the Upper Hunter, and in the Baerami area in particular is far more recent. The oldest olives in the area are perhaps 20 years old.

The climate at Baerami is idyllic for olive growing and in many ways closely resembles the Mediterranean climate. We have long, hot summers (with minimal humidity) to help ripen the fruit without the onset of fungal diseases, winter frosts to assist with fruit set & sufficiently regular rainfall (drought years not withstanding!) to keep the trees healthy. 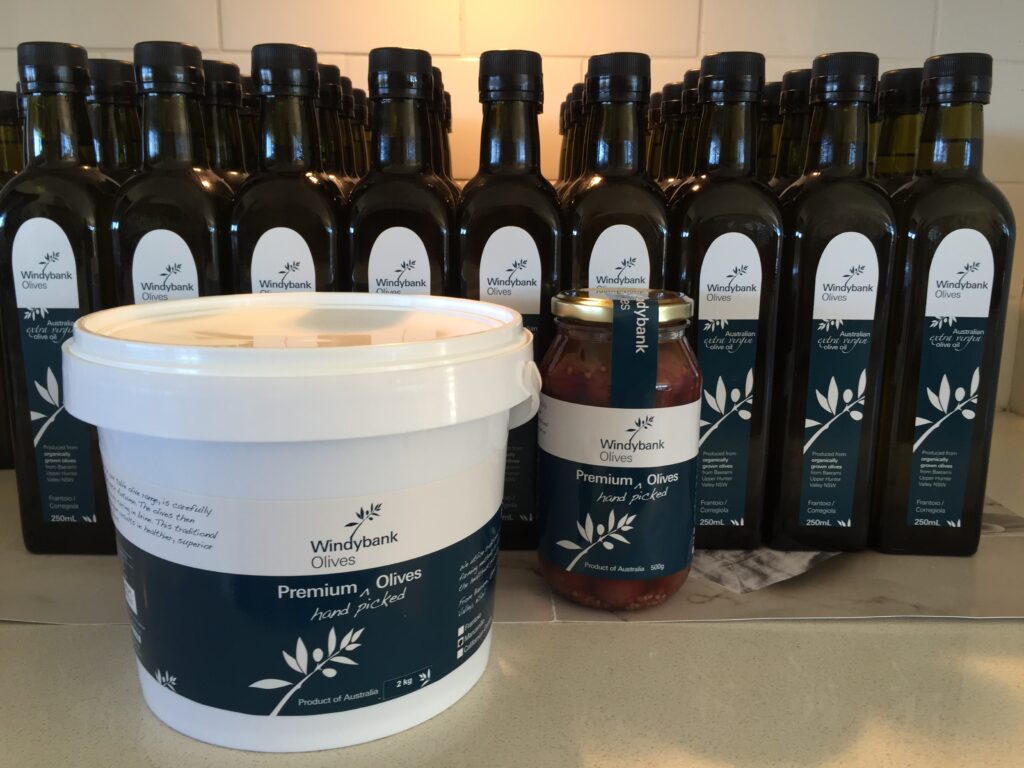 Since 2001 we have managed the grove based on traditional, healthy, organic farming principles without use of artificial or synthetic fertilisers or pesticides.

Trees were planted on an open hillside with plenty of space between them, to allow for excellent airflow and good penetration of sunlight throughout the grove. Humidity has been kept at bay – and we think that this is why our trees have remained healthy and have resisted a lot of the fungal diseases which can plague olives in other areas.

The olives are situated in an old cattle grazing paddock, which has only ever been covered in native pasture. This same pasture continues to grow between the rows of olives. We provide nutrients to the soil through regularly mowing this pasture – creating a layer of mulch which improves the overall soil structure as it breaks down. In years to come as the trees mature and become stronger, we plan to introduce fat lambs to graze around the trees. Not only will they be able to efficiently and successfully keep the weeds down, but they will also add excellent organic matter to the soil in the form of manure.

We only irrigate when rain fails to provide what the trees need, and the water we use for irrigation is sourced directly from the crystal clear waters of the Goulburn River and pumped to tiny sprinklers at the base of each tree.

The Old Dairy at Baerami offers peace, tranquility & loads of privacy. The perfect place to escape the city as a destination on its own, or a stopover on a road trip to explore the beauty of regional New South Wales.

Not too long to wait now! The olives have been picked & pressed. Our Extra Virgin Olive Oil is settling naturally in our stainless steel tanks & will be available to purchase in 500ml bottles & our new 2L “bag in box” very shortly!